FIGHT YOUR WAY TO THE CENTER OF THE EARTH! 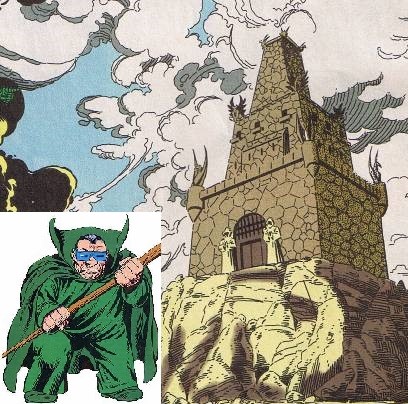 Monster Island, part of the lost continent of Mu, is the home of the great monsters of Earth. From the size of a house to the size of a skyscraper, these monsters are a danger to every continent and under the control of the diminutive Mole Man. The Mole Man is searching the underground caverns of his kingdom for the ultimate Kaiju, the lost King of Monsters Godzilla!

Your mission as a team of heroes is to stop the Mole Mans quest, but as a team of villains your mission will be to find it first! Upon landing on the island, your first objective will be to find the Mole Man’s castle, while avoiding the mountainous monsters that roam the surface. You can fight them, but be warned, each limb of a monster is Paragon-level strength and resistance and each monster has a variety of awesome, terrible powers.

Once inside the castle, you find the secret access to caverns below the surface and face smaller, but formidable monsters that guard the passages. Here in the caverns the Mole Man is king and his army of Moloids, small yellow-skinned humanoids, are capable of rapidly constructing anything the Mole Man desires. The Moloids will try to impede your path as waves of guard monsters close in.

Collect the clues to the hidden lair of Godzilla before the Mole Man and you will be victorious! If you can’t, the Mole Man’s revenge will be a random monster attack Zone event, a rampaging Kaiju that every hero or villain will have to band together to defeat! Teams that survive this zone and defeat the Mole Man will not only have access to the Monster Island zone to collect power monster-based crafting pieces to create temp powers, but will receive the “Spirit Of Godzilla” temp power. This is a click-based ability that increases defense/resistance by 30% and adds Radioactive Breath, a ranged, nega-energy power.