The Kree Shield versus the Skrull Hydra: An Interstellar Cold War

At the end of World War II, Hydra, Hitler’s Science Division of the Third Reich, was scattered and near defeat. NATO’s Strategic Scientific Reserve or SSR and their task force, the Howling Commandos had captured or killed most of Hydra’s leadership, cut off their financial supplies, and confiscated all of their illegal scientific experiments. As nations settled into what would eventually become the Cold War between the United States and the Soviet Union, Hydra had been approached by an alien race seeking ancient weapons left on Earth by a rival race. These aliens used disguise and subterfuge as their main strategies, tactics all too familiar to Hydra. In exchange for their help, Hydra would be supplied with advanced alien technology and resources in their goal of world domination. 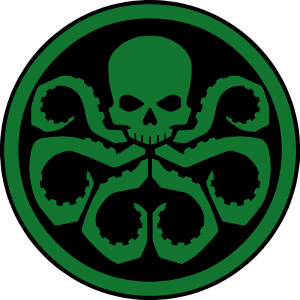 During the Cold War, the SSR and the Howling Commandoes had been consolidated into a secret, global, counter-espionage force known as the Strategic Hazard Intervention Espionage Logistics Directorate or S.H.I.E.L.D. and tasked with aiding allied intelligence agencies, specifically in the growing issues of super-powered proliferation. To the general public, SHIELD was a myth, “men in black” that would appear to wipe away the strange and unusual as swamp gas or weather balloons. To a world that already knew of many mysterious things, SHIELD kept the everyday man from doubting his place in the universe. When SHIELD discovered Hydra was on the rise, it was their top agent, code-named Nick Fury who uncovered their alien benefactors. These aliens, shape-shifters who called themselves Skrulls, with Hydra’s help, had infiltrated every major government on Earth.

10 years prior – “The Supreme Intelligence has deem your request unworthy of further investigation”, those words should have been the end of the discussion for Captain Mar-Vell, but something just didn’t well for hero of the Kree military. Why would the hated Skrulls show interest in such a primitive world on the edge of the empire? The planet had been contested and had some strategic relevance during the war, but so did a thousand others. What made this planet Earth so special? Mar-Vell knew disobeying the will of the Supreme Intelligence would be seen as an act of treason, but something in his gut told him that the Skrulls would never waste their limited resources without good reason. Gathering a squad of his most trusted lieutenants, Mar-Vell set out to Earth. Little was known about the fringe world, except that they had some interesting genetic potential and some physical similarities to the Kree. So technologically primitive, it was believed a single Kree frigate could decimate the entire planet. Not wanted to show his hand, Mar-Vell and his team would attempt to infiltrate the planets populous, tracking down any Skrulls they could find for interrogation.

Other than some odd readings from one of the moons of a large, ringed, gas planet, the system was rather unremarkable. Scans had not indicated any Skrull technology in the system, so Mar-Vell had not deemed it necessary to cloak their entry into Earth orbit. To his surprise and that of his crew, they were being hailed on an old Badoon frequency. The Badoon Empire claimed merchant rights to this galaxy and were allies of the Kree. Truth be told, the Badoon are considered opportunist, who were known to switch allegiances when it was convenient for them. Mar-Vell knew the Badoon would never side with the Skrulls for fear of Kree retaliation. What was certain, was the voice being translated was definitely not Badoon or Skrull for that matter. “To the alien craft currently in orbit, this is the Strategic Hazard Intervention Espionage Logistics Directorate. Identify yourselves and state your intentions.” As it turned out, these “Humans” were not as primitive as the Kree had believed. After some negotiations with SHIELD, Mar-Vell had learned the Earth had repelled a Badoon invasion, a Kronan invasion, and had recently become aware of the Skrull presence on their world.

Seeing the common threat, SHIELD aided Mar-Vell and his crew by placing them in strategic positions around the world to aide them in tracking and identifying Skrull spies. In return Mar-Vell made Kree technology available to SHIELD with the promise that it would never fall into the hands of the general population. SHIELD was now a match for the growing Hydra influence and the scales of what was now an interstellar Cold War were in balance… for the moment.